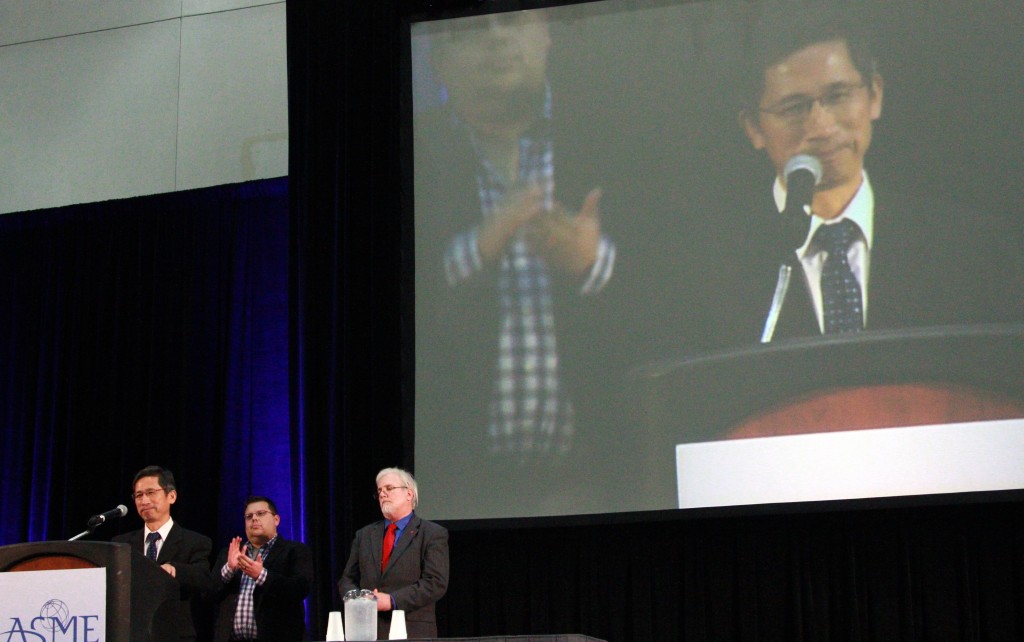 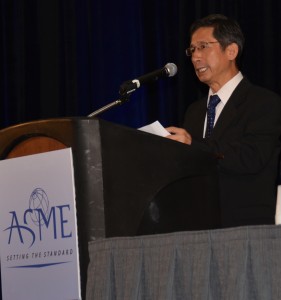 The award was established in 1974 and was awarded in even years at the ASME Biennial Mechanisms & Robotics Conference, until 2005 when the conference was made an annual event. The award is under the direction of the Design Engineering Division of ASME.

I am deeply honoured and touched by the presentation of this award. Looking at this extraordinary list of past award recipients, I feel humbled. This honour list presents world leaders in mechanism theory and design who made enormous contributions to the community. At this moment of time, I run out of words to express my thoughtful feeling and endless recollections. My path crossed with ASME started from my first participation of 22nd ASME Biennial Mechanisms Conference in Phoenix in 1992. Since then, I was much involved in the mechanisms community.

Mechanisms are essence for all machines and robots. This community attracts much interest from different disciplines, including mathematics and robotics. This is a much beloved world community with support from each other, with friendship from each other and with in-depth studies of mechanism theory and design that propel the innovation and inspiration and elate the standing and standard of the whole community.

In my life, I experienced two step-changes, or disruptive changes that entailed two ground shifts of my careers. My first step-change came when Mr Deng Xiaoping in China reopened the university after ten years of the Cultural Revolution and I enrolled in Shanghai Jiao Tong University in 1978 after five years of experience in countryside and factory. This entailed my first shift from literature and arts to mathematics and physics.

My second step-change came when I joined the University of Salford in England in early 1989. This entailed my second shift from control theory, Bond graph and hydraulic systems to kinematics, mechanisms and robotics which I loved so much and has been the best world that I can indulge and realize my inspiration and aspiration.

My love of kinematics and screw theory began from a paper in the beginning of 1990 that was faxed by Joe Duffy to our research group at the University of Salford of a paper-proof of his editorial on the fallacy of modern hybrid control theory. Since then I indulged myself in reading Ken Hunt’s 1978 book on kinematics geometry, Bottema and Roth’s 1979 book on theoretical kinematics, and Mike McCarthy’s 1990 book on introduction of theoretical kinematics. I indulged in 1900 Ball’s book on the treatise of screw theory, 1922 Woods’ book on higher geometry, 1947 Brand’s book on vector and tensor analysis and many other classical books. During the time, the enlightenment came from John Sanger and David Kerr’s early work on point contact and duality of screws, and from Joe Duffy’s lectures at Salford in 1994 and at Unilever Research in 1996. The encounters with Joe Duffy on several occasions at Salford, Wirral, Gainesville and Cambridge left many cherished memories and the encouragement at his home in 1998 on my study of screw systems enchanted me.

During the time, discussions with many visitors including Jack Phillips, Steve Dubowsky, Joe Rooney and Joe Davidson were enlightenment, a long stroll with Gene Fichter on the street of Milan during the 9th IFToMM world congress in 1995 was a monumental stimulant. In search of knowledge, I cherished many seminars at Salford hosted by David Kerr and John Sanger for me to present and develop the concept of finite twists, their implicit relationship with Lie groups and the theory of screw system interrelationship. I cannot forget the pleasure on the train when the multidimensional null-space solution was discovered and the release when the screw system interrelationship was revealed using set theory in the 1990s.

When I moved to Unilever Research in 1996 for an international project on reconfigurable packaging, my love of screw theory enticed me into using kinematics to study origami cartons particularly to develop the equivalent mechanism approach and to develop a new class of mechanisms in the name of metamorphic mechanisms with their variable topology and mobility. The encouragement and help from John Rees Jones who was a close friend of Joe Duffy added the momentum and the support from Qixian Zhang who was a founder of Chinese mechanism community gave the strength. My stay at Unilever research during 1996 and 1997 provided me with a vast stage to study metamorphic mechanisms and their evolved reconfigurable mechanisms and my travel to Seattle in 1998 enlightened me for a study of lower-mobility parallel mechanisms for ankle rehabilitation.

In the 25th ASME Biennial Conference held in Atlanta in 1998, my paper on metamorphic mechanisms was awarded the best paper that was the unique paper award at the time. I had many encounters with leading professionals whose work inspired me. During the time, many encouragements led me to dig deep in my study. I still remember vividly Joe Duffy’s recommendation in 1998 for me to join the IFToMM permanent commission on history of theory of mechanisms and machines, pushing me for the study of the history of kinematics that generated my historical review published in 2006. I still remember my long discussion with Clément Gosselin at the time. I still remember my email communications with Lung-Wen Tsai in 2001 when the ASME mechanisms and robotics conference name was discussed.

Participation in the Ball 100 anniversary symposium in Cambridge in 2000 was again a prodigious experience and that in the first workshop on fundamental issues and future directions for parallel mechanisms and manipulators in Quebec in 2002 was a stimulating occasion, with inspirational discussions on presentation of orientation and position and on kinematics of lower mobility parallel mechanisms with many professionals in the field.

I was particularly enticed by many previous award winners, Clément Gosselin, Larry Howell, Mike McCarthy, Vijay Kumar, Steve Dubowsky and Greg Chirikjian and fascinated by a booklet on kinematics in words edited by Larry Howell.

I was fortunate to receive so much support and so much friendship that I would never forget. In my past 26 years in kinematics and mechanisms, rich materials and books written by Bernie Roth, Ken Hunt, Mike McCarthy, Murray, Li and Sastry, Joe Duffy and Joe Davidson influenced my research path. These great authors were my teachers and will always be my teachers. They are my role models.

In the past six years, I was writing my book on screw algebra and kinematic approaches for mechanisms and robotics some of which were gradually published in JMR 2012 in the title of finite displacement screw operators and in MMT 2015 in the title of Euler-Rodrigues formula variations and quaternion conjugation.

Looking at Bernie Roth who received the award 33 years ago and is still working in the cutting edge of the research, I have to say this Mechanisms and Robotics Award endows me with more hard work, more hard study and more support for our great community.

Thank you, our great community and thank you, my great friends.